After dropping to a low of 720/$ on July 28th, the Naira miraculously recovered, reversing the previous losses trend to trade as high as 635/$ on the parallel market.

This recovery, however, appears to be fleeting as the Naira slowly creeps into the N700/$ region again. The naira sank to N675/$ on Thursday, August 11th, 2022, in the parallel market.

Despite Naira’s recent high supply that has seen it recover against the dollar, none of the fundamental Macro indicators currently tilts in Naira’s favour. 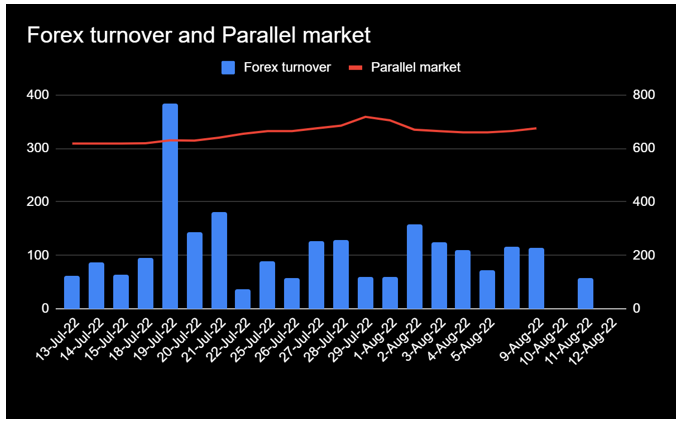 The data shows that when forex turnover was at its peak, the Naira peaked at about N630/$, but since the dollar supply deficit persisted, the Naira plummeted to its lowest at around N720/$ on July 29th.

The data also reveals that the Naira began to strengthen in the parallel market as the official markets’ turnover of forex rose. The amount of foreign exchange traded decreased slightly by 1.75% to $113.64 million on Wednesday, August 10th from $115.67 million on the previous day. Due to the decline in supply, the Naira lost some of its value and closed at N675/$, a 1.5% fall from the N665/$ recorded on Tuesday.

Given the data above, it is likely that the depreciation of the Naira towards the N700/$ region in the black market is likely to continue, barring any major injection of forex into the markets by the Central Bank of Nigeria.